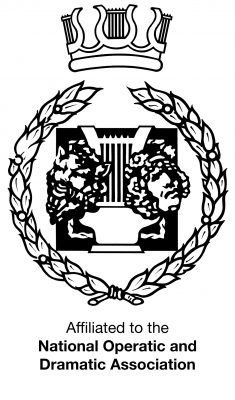 Be inspired by amateur theatre

There’s nothing quite like a good old fashioned music hall! This company had recreated an authentic programme of songs and sketches of the Victorian – Edwardian era.

I must apologise from the outset at not yet knowing who is who; and also for not knowing the titles to all the songs (Editor – names corrected for this version).

The cast engaged the small enthusiastic audience from the start with an energetic opening!  The girls started the proceedings with an animated rendition of “Gaily Tripping” sung with clarity and nice harmonies; the chaps then joined them for a lively “Valderi” with the men looking great in jackets and plus fours! They finished the section with “Don’t Dilly Dally” with the verses cleverly split between the girls; who knew there were that many verses!

Miss Helen Long gave us a saucy little number which was extremely well sung with lively sassy movement and expressions. She made great use of her parasol highlighting the innuendos.

The Yokel Sketch and ensuing number was humorously delivered by Mr Chris Boott and Mr Derek Spears. They played the whole thing dead pan which made it so much funnier.

Miss Kim Antell has a delightful true clear soprano voice and she used it to great effect in her solo well “Just a little bit”. She has lovely fluid movement and this enhanced her performance immensely.

Mr Nigel Antell/Mr Darren Lock/Mr Chris Faulkner –The Mangle Wurzles (I do hope I have this right) were hilarious! I did rather get a fit of the giggles when they came on; I have never seen knees quite like it!  Their actions expressions movement and delivery was spot on. “The Mole Catcher” was one of the highlights of the evening.

The melodramatic sketch starring Miss Kerry Thomas was well acted and came over famously with the audience cheering and booing at every opportunity. Dialogue was pitched exactly right befitting the script.

Mr Nigel Wilson captivated us with a delightful monologue titled “Hard Cheese” in which the audience were encouraged to join in. His second monologue was the well-known “Road to Mandalay” which he delivered with superb intonation expressive visuals and a winning smile. He really knows how to woo and manipulate his audience and he did this effortlessly in both offerings. He has the most wonderful speaking voice which I would happily have listened to all evening.

The Cast then took us on a trip around the world incorporating some community singing. However if truth be told I didn’t know the songs and took pleasure in listening rather than joining in. Everyone on stage was having a great time and thoroughly enjoying themselves; and the men looked rather dashing in their striped blazers.

Miss Tricia Goodchild brought the first act to a close with a comically entertaining garden song with flowers sporting big cheesy grins appearing randomly from behind walls curtains and even in the piano pit.

Act 2 started with a superbly droll smuggler sketch. Even the missed cues and stumbling dialogue that occurred could not detract from the wit and comedy therein. The accents were first rate and enhanced the dialogue brilliantly. I so enjoyed the way everyone threw in an ahrrr! whenever they felt so inclined including the musical director!

Miss Cathy Ramsell told us all about her holiday. She went on a cruise with her family but had to share the boat with rather a lot of animals, and apparently the weather was total rubbish; did nothing but rain! She is such an accomplished raconteur I was totally engrossed from the outset. She was delightfully animated and her vocal inflection and emphasis matched this wholly.

I just know I’m going to get someone in this trio wrong and I’m truly sorry! (Editor – names corrected for this verison) The Wilson, Keppel and Betty “Sand Dance”  performed by Chris Faulkner, Kim Antell and Chris Boott was a knock out! I think they may have watched some footage as it was a near perfect as you can get. Movement was well executed with clean precise steps and super fluidity.

There followed a sketch which relied on each of the actors using a foreign phrase book. Whilst I appreciate the work that had gone into this and the skill of the players; I, unfortunately, did not find it remotely amusing.

To round off an enjoyable and fun evening we were given small union flags to wave as we sang some stirringly nostalgic songs.

Mr Christopher Goodchild kept control of proceedings entertaining us with great alacrity of dialogue. He was great fun and interacted with the audience and cast splendidly. There was much ad-libbing as he adapted his script to fit the small audience; however this did not detract one bit but gave us even more reason to laugh.

Chris Boott – (Director) – I was really impressed with the way this production had been put together; the acts ran effortlessly from one to the other at a good pace which never wavered. Chris made sure the cast fully understood the true style and meaning of “Music Hall” and directed them to be larger than life animated and energetic but most of all authentic music hall acts. I liked the way he made use of the cat walk round the pianist, this worked extremely well. Congratulations on a first rate show.

Mr David Wilcox as musical director David had worked wonders. He accompanied the cast sympathetically and played with superb feeling. He gave confidence to the performers who had immaculate timing and excellent diction.

Ange Boott/Cynthia Newman – (Producers) – What an enormous task this pairing had in ensuring this production ran smoothly. There were so many factors that needed to be taken into consideration, from organising timings for the meal and subsequent performance to engaging technicians and crew. A splendid job well done!

Kim Antell – (Choreographer) – This young lady had created some simple routines making great use of effective patterns. She had drilled the cast so they were foot perfect (though I did note one of the girls go wrong in the opening number. Remember do not laugh if this happens as it draws attention to the fact!) and the cast performed them with energy and enthusiasm.

Sandra Fulkner – (Stage Manager) – This young lady worked wonders. She had so much to do but did it brilliantly. There were absolutely no hitches whatsoever.

Chris Chapman – (Lighting) – The stage was so well lit; at times light flooded the acting area at others it was dim and atmospheric; however at no point was there any shadowing. I loved the use of the spot light which really enhanced the action giving the actors a rosy glow.

Ange Boott – (Wardrobe) – Costumes were outstanding! They were authentic to the period and spot on for each act. The ladies frocks were bright and colourful with flattering complementary accessories. I have already mentioned the men’s plus fours and blazers and here again they were accessorised with hats and boaters of the era. Let’s not forget those smocks! I was impressed that there was a consistency to the footwear which can so often be too varied.

Louise Marshall – (Make-up & Wigs) – Make-up was great; with all the characteristics of the Victorian era. Lips eyes and cheeks were nicely defined giving a perfect overall effect.

Chris Chapman/Sandra Faulkner/Bill Macdonald/Adrian Thomas/Roy Smith – (Set Construction) – From the chairman’s pulpit and inn’s bar to the cat walk round the pianist everything had been well constructed, and was totally fit for purpose. I rather liked the kegs in the smugglers scene.

Chris Newman – (Set Artwork) – assisted by – Cynthia Newman/Bill MacDonald I thought the painting was first class, particularly the set for the Yokels scene which was bright and effervescent with an almost caricature feel.

Cynthia Newman – (Programme) – A simple four page programme that contained a wealth of information and well laid out. I really liked the front cover which captured the essence of the Victorian Music Hall